John Thomas, a Eugene financial consultant who has chaired the board of the Oregon Public Employees Retirement System for the past six years, ran his last meeting this month.

It’s an obscure, unpaid and somewhat thankless position. But the PERS Board has enormous influence over the administration of the state’s retirement system. One key task: setting the economic assumptions that determine how much government employers, and ultimately taxpayers, are required to contribute each year to cover employee benefits.

With a $22 billion deficit, those contributions are now at historical highs and going higher.

Thomas, a registered Republican, was appointed to the board by former Gov. John Kitzhaber in 2012, whom he’d never met. That was just as the board was coming to grips with the pension funding chasm opened by the 2008 financial crisis. With 40 years of experience in retirement planning, he had valuable background and experience. And after just two meetings, with long time members ending their terms, he was appointed chair.

Gov. Kate Brown’s office has been looking for a successor since the beginning of the year. Thomas’s second term on the board expired in February, though he agreed to stay while Brown found a replacement, who may immediately become the chair. That hasn’t happened yet. At least one candidate has declined the job. Brown said Thursday that she’d nominate someone in September.

The pension system is one of the hottest public policy topics in Oregon, and Thomas agreed to share his thoughts on the state of the system and the board.

Q: What does the Public Employees Retirement System Board do, and what doesn’t it do?

A: Our primary responsibility is to PERS members. It’s not to employers or legislators. We need to make sure the benefits that have been contracted can be paid for. The math is the math, even if it’s painful for employers. A lot of people think we set benefits. We don’t. We’re strictly making sure that the benefits the Legislature has offered are adequately funded. A lot of states play games with funding, but this board has to be really prudent to make sure the funding is there for future generations.

Q: Describe the current state of the fund to someone unfamiliar with it?

A: There are significant funding issues for the current level of benefits being paid. It’s not going to go away in the near future. In the absence of doing something to have some other party absorb more of the costs, it’s going to continue to impact employers’ ability to fund other programs because it’s such a heavy lift in terms of PERS funding. If the board continues to do its job, the beneficiaries of Oregon will always be provided for, but it’s going to be very expensive. You won’t hear any apology from the PERS Board for this. We’re not going to be Illinois or New Jersey, because they play a lot of games with their funding. But it’s getting to the point where you have pushback from taxpayers and it’s going to be really difficult for employers to continue to fund at this level. The issue is the legacy costs that are baked in, and they’re going to continue for another 20 years.

Q: Does the board bear any responsibility for the funding problem?

A: Clearly previous boards and the Legislature did not address the issues. If you look at the history and how they dealt with the money match annuity formula, and the way investment earnings were passed through to members (instead of being retained to shore up the fund), they didn’t pay enough attention to the actuarial issues. It’s beyond me why they didn’t address that. They weren’t paying attention to the math. I wasn’t there, but that’s’ my personal observation.

Q: How has the PERS Board changed over time? What are its principal challenges today?

A: Since 2003, the board is only five people, three of whom are non PERS beneficiaries. That’s huge. It really forces the issues to be dealt with. There is one stakeholder member and one department head, but the practice has been that the board chair comes from the non-beneficiary side. That’s been a significant change.

Administering the plan is becoming very complicated. A third-party study says we’re No. 2 in terms of complexity among public plans, and we have to make sure we have the infrastructure and the financial support from the Legislature to be accountable to members. There’s a 25 percent increase in the budget because of all the things that have been legislated, and stakeholder groups continue to want to see more in terms of benefits like investment choices and target date funds. And we have to respond. It’s startling, but there’s nothing in the budget request that shouldn’t be there. The other challenge is continuing to communicate with employers about funding issues and rate setting, explaining, re-explaining. We’re not going to see rates level off for another six years, and it’s going to level off, not go down.

Q: The board sets the fund’s assumed earning rate on investments. Do you think the fund can earn 7.2 percent a year, or should it be lower?

A: It’s probably a little aggressive. The board will re-review it. It’s below the median around the country, and the lower the assumption, the higher the contribution rates for employers. When people say we need to be at 5 or 6 percent, well maybe, but the cost associated with that would cripple a lot of employers. We’ve lowered the rate three times in the six years I’ve been on the board. We rely on the Oregon Investment Council and the capital market projections from Milliman (the system actuary), and we’re pretty well aligned with their advice and numbers.

Q: One thing I hear regularly is that PERS benefits have already been reduced so much that’s its little more than a 401(k) plan for new employees. Can you comment?

A: It’s far more than a 401(k). If you look at the plan for new employees, it’s a pension equal to 45 percent of their salary for 30-year members. Then there’s still 6 percent going into a 401(k)-type account. That probably provides another 15 percent of final salary when a member retires. Then social security is another 30 percent. There is nothing Oregon needs to apologize for in terms of this plan.

Based on the info I have, about 60 to 65 percent of employees don’t have any skin in the game. Most plans require employee contributions of 7 to 10 percent, but most employees in Oregon are not having to pay that. It’s a very generous plan and people participating ought to feel fortunate they have what they have. That‘s why you have general taxpayers who are upset that they continue to pay but don’t get to play. 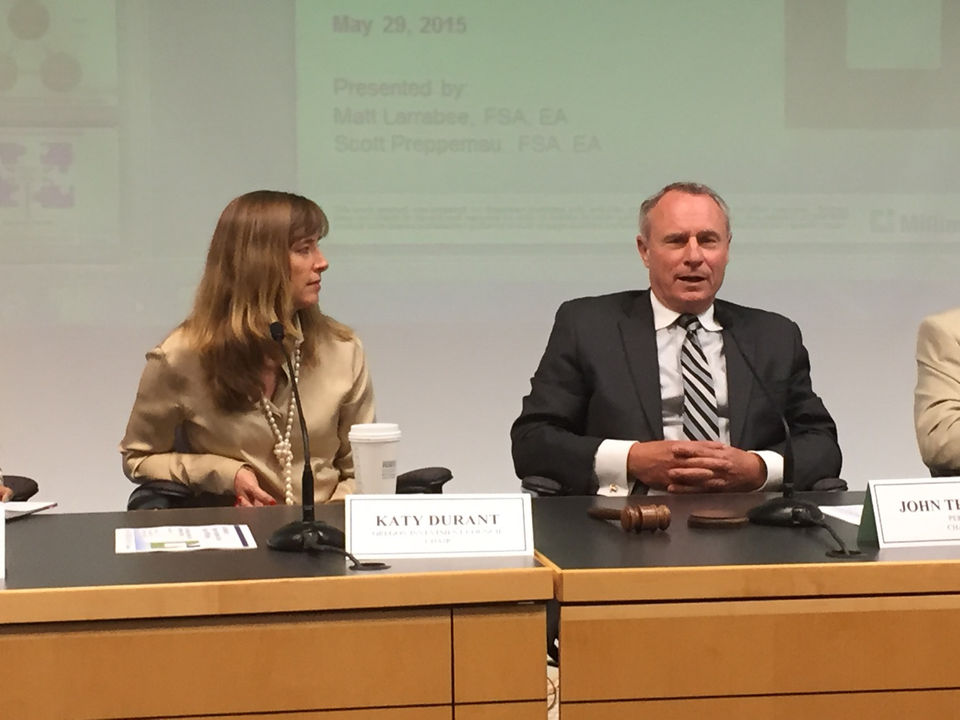 In this 2015 file photo, Katy Durant, the former chair of the Oregon Investment Council, and John Thomas, then chair of the PERS Board, address a joint session of their boards to review the impact of the Oregon Supreme Court’s  decision on PERS reforms. (The Oregonian/Ted Sickinger)

Q: Why is PERS is one of the most complicated plans in the country?

A: You essentially have five plans right now. There’s Tier 1, Tier 2, Tier 3, the individual account, target date funds, the money match, the full formula retirement, with employee choice coming in the future. It’s the full meal deal, and it’s a hell of a lot of stuff that needs to be accounted for. Most states just have a defined benefit or a 401(k). You can participate in one or the other but not both.  One of the reasons I’m feeling okay about this transition is that Kevin (Kevin Olineck, the new executive director of PERS) gets it. He knows how complicated this is.

Q: Every legislative session, there’s a crop of bills offered to “reform” PERS, most of which involve lowering employee benefits or compensation. Is there anything you feel is appropriate or fair?

A: Clearly there should be more emphasis on the defined benefit plan and less on changes to the (401(k)-type) individual account. The more you focus on changes to the individual account, the less emphasis you place on the defined benefit plan and its funding issues. I think it’s appropriate to divert some money from the individual account to the defined benefit plan. That’s not a Supreme Court issue, it’s a bargaining unit issue. I’d also go back and address the Tier 1 folks who don’t have a cap on their salary in benefit calculations. That’s how you end up with Johnny Delashaw and Mike Bellotti (an OHSU surgeon and former football coach who have among the system’s highest benefits), because there’s no limit on covered compensation. That only applies to Tier 1 folks. Most employees won’t feel that, but it certainly makes a statement and gets rid of that red-flag attention in the media.

Q: So far, the governor has not named a replacement for you. What’s your advice?

A: My advice is that you never bring a person into a chair position without the appropriate background in the issues that PERS deals with. Someone who understands the math that goes into rate setting, and the requirements and issues dealing with administration and employee communications. Because of my background, I understood defined contribution and defined benefit plans, and how uninformed employees can be in terms of planning. Not everyone has that background. They don’t need to be actuaries, but they need to understand the history of the plan and the correct questions to ask. Coming in and dealing with the complexities of PERS is daunting enough. To come in as chair… It doesn’t make any sense.

It’s been a pretty good board in terms of neutrality. How that evolves in the future depends on who the governor chooses, and if they want a hand-picked person whose attitudes they like better instead of someone who brings the financial background to the table. The states that have gotten into problems have gotten there because of politics