By Ted Sickinger The Oregonian/OregonLive

Seven months before legislators convene at the Capitol, lawmakers, business groups and the governor are crisscrossing the state to discuss the state budget, education funding, rising public pension costs and taxes.

It’s the same set of issues that has tied the Legislature in knots for years and likely is a preview of another big budget battle in 2019.

Underlying all the discussions: Despite the best economy in three decades, Oregon still hasn’t gotten its fiscal house in order.

Unemployment is as low as it’s ever been. Wages are growing. And in a state where the budget is heavily dependent on income taxes, the second longest postwar expansion on record has turned into a revenue gusher.

Yet expenses are projected to grow even faster. If the state maintains the current level of services, economists project, it will face a general fund deficit between $500 million and $1.1 billion in the next two-year budget cycle, and even larger gaps in the following two biennia. And that assumes the economy continues to boom for the next six years.

The question now is whether lawmakers will pass what some are calling a “patch and pray” budget in the next legislative session, which starts in early 2019, kicking the problem down the road for another two years.

“We know a recession is coming, and when it comes it will compound the problem,” Jeremy Rogers, vice president of the Oregon Business Council, told members of the Eugene Chamber of Commerce at a meeting earlier this month.

Business groups are using their statewide tour to sound the alarm about that recurring gap between revenues and expenditures, and the lack of political will to fix it. They’ll highlight the “fiscal crisis” when they unveil a new policy wish list at the annual Oregon Leadership Summit in December.

That playbook, they say, will include a proposal to raise taxes, including business taxes. But they’ll also call on lawmakers to rein in runaway costs – specifically pension and other benefit costs – that they say are overwhelming state and local governments ability to provide basic services and make strategic investments.

Meanwhile, a bipartisan group of lawmakers, the Joint Interim Committee on Student Success, is on its own listening tour. It’s supposed to determine what Oregonians want from their troubled education system and how to pay for it.

The group is modeled on the committee that toured the state before developing the $5.3 billion transportation plan that lawmakers passed in 2017. Many observers expect a similar outcome this time around, with a detailed education plan providing the political cover for the business tax increase that Democrats and unions have been advocating for the last three years.

Finally, Gov. Kate Brown is on her own “State Budget Tour.” She’s making the rounds with handful of staff and agency heads, providing a budget 101 presentation to demystify the budget process for community leaders and businesses, and to begin prioritizing what she’ll offer in her own budget proposal in December.

The upshot of all this chatter will depend on election results in November, whether Brown is re-elected, whether Democrats gain a supermajority in the house, Senate, or both, and whether   business groups develop any political muscle to back their policy proposals. 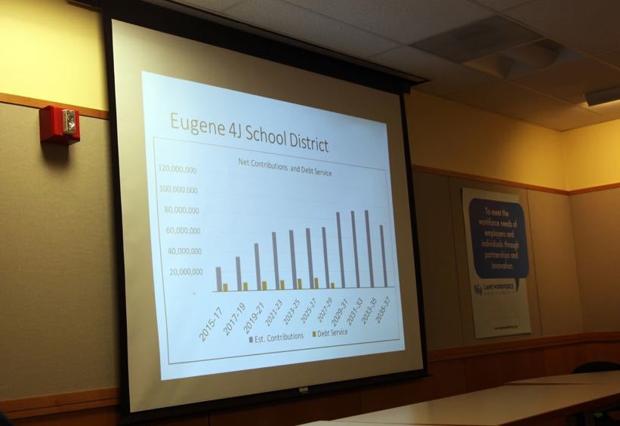 The Oregon Business Council’s presentation on the state’s fiscal problems focuses the budget problems that rising pension contributions and pension debt payments are causing in school districts around the state.
Ted Sickinger| The Oregonian/OregonLive

But they spent much of the meeting in Eugene talking about the state pension system, including skyrocketing costs to government, and its centrality to the state’s education funding problems.

The Oregon Business Council, a policy think tank for the business community, has spent years curating a list of possible moneysaving pension reforms. But for the last four legislative sessions, lawmakers have declined to act on any of them, often repeating the same mantra: There are no reforms left that are legal and economically significant. It’s a position that the governor has repeated on her tour.

But that’s simply untrue, according to experts on the pension system. While the Oregon Supreme Court has rejected any changes to benefits that members have already earned, it left the door open to changing benefits earned for future service.

The business groups want to reinstitute employee contributions to the pension fund (there are none today), which would offset employers’ rising contributions. And they’d like reduce to future benefits of longtime employees to match those of employees hired after 2003, which are far less expensive.

Those two things, they suggest, could lop $6 billion off the system’s unfunded liability, which is currently about $22 billion. At that point, they say, the state should use its future bonding capacity to ease the pressure on local school districts, counties and cities currently struggling with the costs.

“There’s an opportunity to be done with this PERS issue,” Rogers told the assembled crowd in Eugene. “If we were to agree that these are the legal and equitable reforms, then we could own up to the rest of it, and pull it off the back of all these jurisdictions.

The business groups are also promising to come up with a plan to raise taxes, but have yet to determine what their members will support. Either way, they have little interest in a tax deal without some form of “fiscal discipline” to show for it, the same position they took last year.

The business lobby is better organized this year, but its influence on pension reform in Salem is dwarfed by unions. That’s part of the roadshow’s mission — building local coalitions willing to take the issue to their local representatives.

“There’s no way we can push this up the hill without key public sector partners,” said Ginny Lang, the interim president of Oregon Business and Industry.  “I can get a legislator saying that’s a great idea, but the first time a mayor or school board member calls, my idea is toast.” 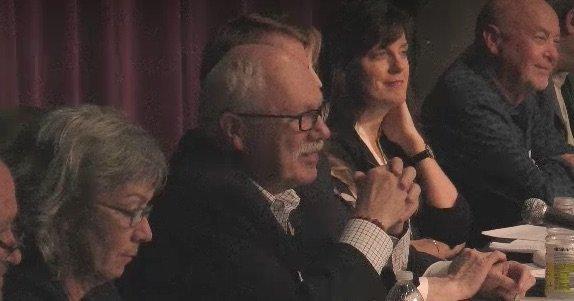 There are plenty of ideas on how to address Oregon’s abysmal graduation rates and short school years, but most involve more money.

The committee, he said, will break into three subgroups to drill down on some of those topic areas this summer. It will also be making additional visits to schools in Beaverton, Redmond, Portland and Coos Bay.

Roblan said that while the effort is modeled on the transportation package, it may be even more complicated. Individual districts have very different needs and expectations. One size will not fit all, he says.

“At the end of the day not everyone is going to get what they want,” he said.

Sen. Brian Boquist, R-Dallas, quit his post as co vice-chair of the committee after two meetings, saying he could already see where it was headed. “Let’s get real,” he said. “It’s not about successful students. It’s about finding more money to pay teachers and cover the rising cost of PERS.”

Roblan says he disagrees and is pleased with the the engagement by both community members, business leaders and members of the committee.

“We’ve clearly heard from businesses about cost containment,” he said. “And before we start looking at the money asks, we need to build in accountability for school districts to actually do these things.” The governor’s roadshow includes a presentation by George Naughton, the state’s chief financial officer. He is emphasizing the same structural budget gap as business leaders, caused by the state’s growing share of Medicaid expansion costs and rising pension costs.

The governor’s spokesman, Bryan Hockaday, says her tour doesn’t dovetail with either the education or business roadshows, though it touches on most of the same themes.

Brown, who is running for re-election, is trying to set budget priorities earlier than usual and she wants input from community leaders across the state. Her roadshow includes George Naughton, the state’s chief financial officer. He is drilling down on the same structural budget gap as business leaders, caused by the state’s growing share of Medicaid expansion costs and rising pension costs.

Brown’s chief of staff, Nik Blosser, is also speaking to the pension funding problems, particularly its effect on school districts. The governor has hinted she might support requiring employee contributions to the pension fund, but only after she sees the results of a new compensation study due out his fall.

Participants say that Brown, in her own presentations, is focusing on a broader set of initiatives. They include fully funding a 2016 voter approved career and technical education initiative, and effort she is calling Future Ready Oregon, at a cost of $300 million. She wants to address the state’s low graduation rates with a series of K-12 initiatives. And she’s looking to continue funding the state’s Medicaid expansion.

Naughton said this week that he doesn’t call the state’s budget situation a “fiscal crisis.” In 12 years as state budget director, he’s seen a lot bigger projected budget gaps on a much smaller overall budget. He says the state faces a “planning gap,” not a budget deficit.

“Many states are facing the same kinds of things we are,” he said. “We will manage for it and figure it out.”